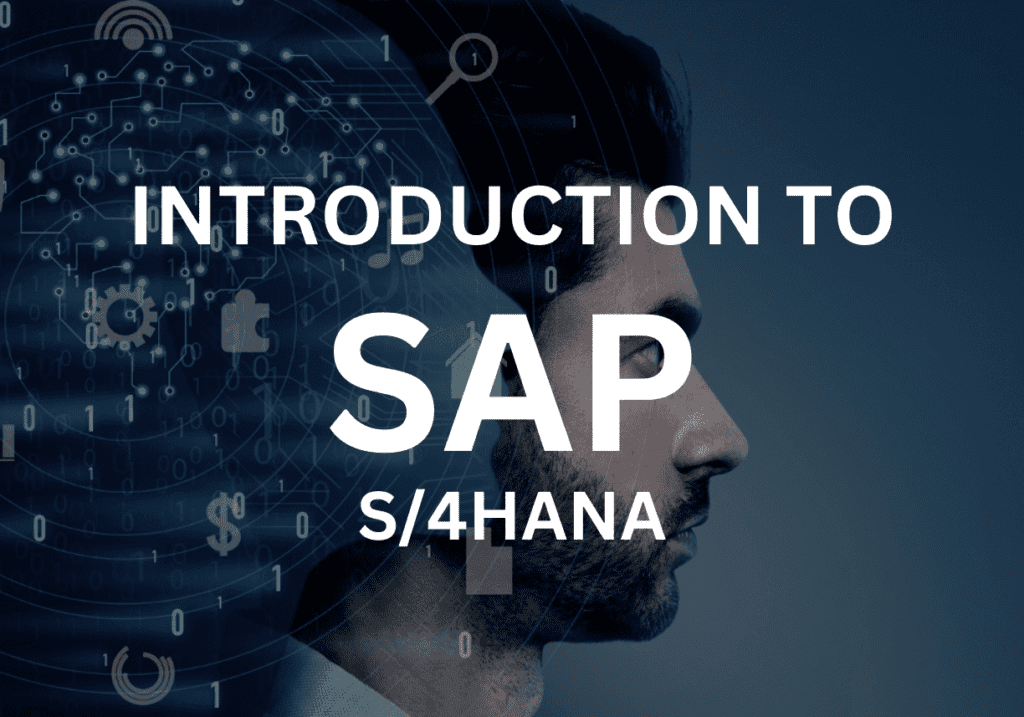 SAP S/4HANA is the Enterprise Resource Planning business suite built on the SAP HANA in-memory database, allowing businesses to perform transactions and analyze business data in real-time. S/4HANA is the centerpiece or digital core  of SAP’s strategy for enabling the customers to go through digital transformation, a broadly defined process in which they can modify or create new business processes and models. This allows businesses to be more adaptable, responsive, and resilient to changing business needs, customer demands, and environmental conditions. This S/4HANA-centered business environment is referred to by SAP as the intelligent enterprise.

It is no secret that business organizations must exert control over various day-to-day processes related to the company’s operations. Several vendors introduced Enterprise Resource Planning (ERP) systems to the market several decades ago to manage all business processes simultaneously.

With its system, originally called SAP RF, which quickly gained popularity, SAP quickly became one of the leaders in that sphere. Then there was SAP R/3, which can still be found in some organizations.

Around the middle of 2000, the core of SAP ERP systems was renamed SAP ERP ECC (Enterprise Central Component). It was considered SAP’s main product for many years, and upgrades were released regularly. The system allowed for executing various work processes and using multiple databases – both HANA and those created by external developers – to classify and store massive amounts of data. Oracle, Microsoft, MaxDB, and IBM were among the developers who provided these databases.

The inside of the ERP system grew too large and complex as time passed, with an overwhelming number of tables containing duplicate data. The situation changed in 2015 when SAP began developing SAP S/4HANA. The goal was to run an ERP system specifically on SAP HANA and take advantage of all the advantages of an in-memory database. It was a new branch in developing SAP systems that were supposed to be more efficient and user-friendly.

Now is the right time to mention that SAP has been experimenting with in-memory technology for quite some time. Still, by the time S/4HANA was born, these high memory operations had become much more convenient and could provide access to information faster than the same operations with data stored on a hard drive.

What are the SAP S/4 Editions?

SAP provides several S/4HANA deployment options, including on-premise and cloud deployments. This on-premise version corresponds to SAP Business Suite regarding content, functionality, support, and industry solutions. Users can access the full range of ERP services and choose their upgrades. The table below summarizes the most important S/4HANA On-Premise editions.

This version was released in 2016, following the previous version in 1511. S/4HANA 1610 now offers a broader range of functions and consolidates all financial data in one system, thanks to the integration of SAP S/4HANA for Finance. The operation is even more intuitive, thanks to the tile design and new search functions. This version, in addition to new industry solutions, includes SAP Extended Warehouse Management (SAP EWM), simplifying the system landscape further.

Version 1809, released by SAP in 2018, includes even more machine learning functions. These are primarily concerned with procurement, production, and sales. Predictive accounting, for example, makes financial accounting planning easier by simulating goods issues after a sales order. This on-premise version also incorporates S/4HANA Cloud innovations. Since the last release, users have benefited from over 1,500 new features.

S/4HANA 1909, the most recent on-premise version of S/4HANA, was released in late 2019. This release also emphasizes intelligent automation, forecasting, and best practices. Group Reporting is a significant innovation that assists businesses in achieving rapid group reporting. Financial planning can now be done entirely within the ERP system thanks to the integration of the SAP Analytics Cloud. The financial impact of business decisions can be easily simulated using modeling.

What are the benefits of SAP S/4HANA?

The provider has completely redefined ERP systems with the introduction of SAP S/4HANA. The intelligent ERP solution is regarded as the most revolutionary SAP innovation since 1992. At the time, SAP R3 was on the market, an ERP software that could record and control all of a company’s processes.

SAP S/4HANA is more than a data management tool, thanks to technological advancements such as machine learning and predictive analytics. It can also automate and optimize business processes and prepare companies for a digital future, making them more competitive. In a nutshell, the following are the tangible benefits of SAP S/4HANA:

SAP S/4HANA is available in various configurations and pricing models. When undergoing a transformation, customers can choose between an on-premise version, a hybrid model, and a subscription-based cloud version. The latter is hosted on an SAP server, saving customers money on resources like hardware and maintenance. They also benefit from faster response times and cycles of innovation.

The SAP Hana in-memory database allows users to access data in real-time. Instead of being stored on a hard disc, data is stored in the main memory in a collective form, avoiding data redundancy. This simplified data model reduces database size and enables you to perform ad hoc analyses and transactional procedures in the same system.

What is the difference between SAP S/4HANA and SAP ECC?

SAP ECC is a classic on-premise ERP system distinguished by its modular structure. CRM, SRM, and SCM are among the core applications. One of the most vital differences between SAP S/4HANA and SAP ECC is that S4 Hana only runs on the Hana database, whereas the Business Suite runs on the Oracle database. SAP ECC also works with databases from other vendors, such as Db2, Oracle, and Informix. Although the system has been thoroughly tested, it will be completely replaced by SAP S/4HANA in the coming years. The new system enables forward-thinking work both on-premise and in the cloud.

An intelligent ERP system SAP S/4HANA has much faster reaction times than SAP ECC due to the in-memory database. Another significant difference is that SAP S/4HANA’s OLAP and OLTP functions are no longer separated, allowing for more complex analyses.

What is the main difference between SAP HANA and SAP S/4HANA?

The similar-sounding terms quickly confuse new ERP users who have not yet dealt with the topic. However, the distinction between SAP S/4HANA and SAP Hana is straightforward. SAP HANA is a type of database, whereas SAP S/4HANA is an ERP suite designed for SAP HANA.

Being the successor to SAP ECC, SAP S/4HANA uses the in-memory platform’s infrastructure to enable quick access to and analysis of data. SAP Hana also acts as a platform for user-defined applications in software development.

What are the major challenges in migration to S/4HANA?

What are the solutions to businesses’ challenges when migrating to S/4HANA? There is no silver bullet in this situation, but here is a closer look at three of the most widely reported issues, as well as some strategies for dealing with them:

When working on a migration like this, businesses must consider many factors, such as custom modules, country-specific configurations, interface dependencies, manual workflows, etc.

Businesses that have heavily invested in custom ABAP development will discover that (unfortunately) a significant amount of legacy code can no longer be compatible with the switch to S/4HANA; entire database tables have been removed. You must identify and adapt your custom ADAP code objects to avoid syntax errors and unexpected results.

Marketing and sales, supply chain management, monthly reporting, business intelligence, and other aspects of your business rely on master data. Using unclean data during your S/4HANA conversion (especially in a brownfield approach) is asking for trouble, so clean things up ahead.

What are the best ways to migrate to SAP S/4HANA?

When a company decides to go greenfield, it abandons its existing ERP system. This has the advantage of allowing the implementation of a new, uniform system that only contains the required processes and data. When a company completely redesigns its enterprise architecture, innovations can be more easily integrated while maintaining a high level of functionality.

The brownfield strategy involves system conversion. Existing business processes are taken over and, if necessary, optimized. This approach is the most popular migration path because most businesses do not want to abandon their custom ERP system completely. According to the study, 44% of respondents prefer this strategy, while 42% prefer a hybrid of greenfield and brownfield sites.

EA tools divide the conversion into distinct phases to ensure a smooth transition. The tools also provide that old processes are rethought to avoid redundancies and complexity. The advantage of the brownfield approach over the greenfield approach is that the project time for system conversion is reduced.

Landscape transformation, strictly speaking, is not a stand-alone migration strategy. It is simply a method for large organizations with complex system landscapes to prepare for migration. This means databases are cleaned and consolidated before the change to reduce the footprint.

Companies can also use this method to integrate multiple ERP systems from different vendors. This type of simplification is also possible during the transformation itself. This is dependent on the system landscape and the target system. In many cases, an enterprise architect will combine all three approaches to achieve the best results.

SAP S/4HANA is undoubtedly the intelligent real-time ERP system of the future. It allows businesses to optimize their processes or build them from the ground up. They can achieve a high level of automation and transparency by utilizing cutting-edge technologies such as machine learning and simulation. This has also increased the demand for trained professionals to carry out this task effectively. TekSkilled recognizes this need and, as a result, provides comprehensive SAP S/4HANA training to prepare students to face the challenges of this industry.